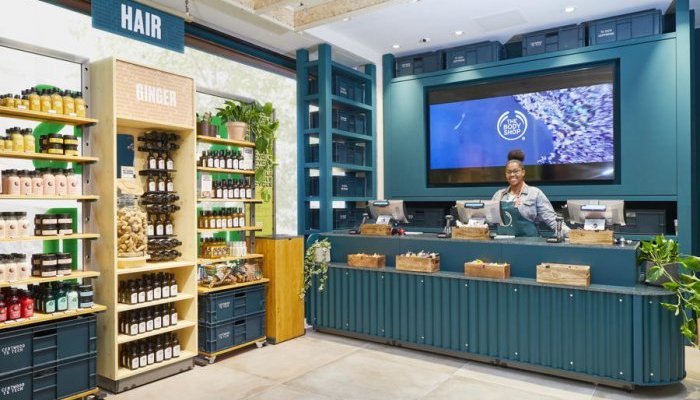 To reengage with its early environmental activism, the British brand aims to offer in-store refill solutions to as many customers possible. This action meant to reduce the consumption of single-use packaging is perfectly in line with The Body Shop’s activist heritage revived in different forms today. Hugues Laurençon, General Manager France and Benelux, gave us a few details.

As soon as April 2021, 47 stores in France will offer refill stations for a selection of shower gels, liquid hand soap, shampoos, and conditioners. On the global level, 400 stations should be installed by the end of the year, so that all stores can be equipped within the next five years. In France, 47 stores are part of the plan – the better part of the network. The selection will vary from at least six references to a maximum of 12, depending on the store size.

In practice, a 300-ml recyclable aluminium-based bottle will be available for EUR 2.50 to go with the refill dose chosen, which will cost EUR 7 – less than the packed version. The aluminium bottle will then be refilled over and over in a store. Customers are responsible for cleaning the containers. In stores, beauty advisors will stick the labels on the bottles to indicate the expiry dates and batch numbers.

“With this project, The Body Shop sticks to its activist heritage, that of Anita Roddick, its founder. We are proud to be the first cosmetics brand to deploy this solution so broadly, both in terms of number of stores and references. Since we are B-Corp-certified, we feel responsible for the packs we market. All our products are recyclable and contain plastic derived from fair trade,” explains Hugues Laurençon.

Indeed, in 2019, the brand set up an exclusive partnership with a startup based in India to support plastic waste collectors working in the streets, most of whom are ostracised. This partnership provides them with fair, stable revenues, while preventing waste from proliferating in nature. The recycled plastic from this chain is now contained in different proportions in all The Body Shop products.

In addition to refill stations, a new store concept called Activist Maker Workshop was created to use second-hand furniture. “Everything has already had a first life, we actually do industrial recycling. It is a whole, a store redesigned with new products,” says Hugues Laurençon. The first store opened in London’s Oxford Street in 2019. In France, it will start with the city of Dijon in June, and then Carré Sénart in September.

As for products, the iconic “body butters” that made the brand successful were reviewed to obtain formulas with 95% to 99% of ingredients of natural origin for 96 hours of hydration. And the hardly recyclable black plastic lid was replaced with a new aluminium lid.

As for perfumes, the classic White Musk designed in 1981 will now be available in a new bottle based on 42% of recycled glass and fitted with a removable pump, without any overpackaging.

A campaign for Self-Love

The Body Shop is also willing to contribute to making beauty rhyme with inclusiveness. A global study conducted by Ipsos revealed women’s lack of self-love in several countries, especially France: French women are ranked last according to this Self-Love Index, together with Saudi Arabians. As a solution, the brand launched the #SelfLoveUprising movement in partnership with different celebs, including singer Lous and the Yakuza in France and Belgium, and Jameela Jamil, an actress and Body Positive activist, in the UK. They are the spokeswomen of a campaign launched on March 16 on the social media and in stores.

“Lous and the Yakuza embodies self-love. She supports us with this campaign to pass on the message that to love others, you need to start with yourself. We suggested she choose an association for which we will organize a fundraising campaign,” explains the General Manager.

Heading to Asia and China

Now that the brand is part of the Natura & Co group, they have spoken up again, willing to broaden their presence through physical stores in France and around the world. “It is crucial to have a human connection, and it is not because the situation is not favourable that we will let down retail. We want to share our values; that is why we need human contact. We believe in the power of relationships,” says Hugues Laurençon.

Asia is a new territory to conquer, he explains. “Our brand deliberately avoided China until now, despite its dynamism, because we did not support animal testing. But soon, we will be able to enter this market, thanks to the recent government decisions to ban animal cruelty.” As far as France is concerned, the store fleet will need to be optimized with openings or relocations.

As regards their joining the Natura & Co group, Hugues Laurençon is delighted about the union of brands with common values and the will to give The Body Shop its roughness back. “The idea is to give the brand its voice back. It is not a cosmetic brand like others. It is a committed brand. Selling products is the means, the message is the end,” he concludes.