The prestigious Ellis Island Medal of Honor is awarded to Charles Chang, Topline

On May 10th, Charles Chang, President of Topline, received in the United States the prestigious Ellis Island Medal of Honor awarded by The National Ethnic Coalition (Neco). A ceremony that rewards a person who has made his mission to share with those less fortunate their wealth of knowledge, indomitable courage, boundless compassion, unique talents and selfless generosity; all while maintaining the traditions of their ethnic heritage as they uphold the ideals and spirit of America. To note that Mrs Yue-Sae Kan, Founder of Yue Sai Cosmetics in China, was also among the laureates. Review on the accomplishment s of Topline’s number one. 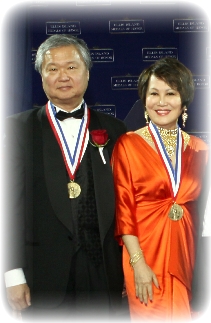 Born in 1949 in China, Charles Chang grew up in Taiwan. At age 22, he came to America as an international student at the University of Mississippi where he received an MS degree in Chemical Engineering. He continued his studies at Rutgers University, earning an MS in Packaging Science and Engineering, and later obtained an MBA from Farleigh Dickinson University in 1978 and an APC in Marketing from NYU in 1979. Before he started Topline in 1982, he gained corporate experience at Lever Brothers, Avon and Airwick Industries.

Since founding Topline, Mr. Chang has transformed his company from an importing business to a vertically integrated manufacturing operation that is emerging as one of the global leaders in the cosmetic packaging industry. Topline has its headquarters in New Jersey and more than 1,000 employees, operates factories worldwide in China, U.S., and Mexico. Additional corporate offices are located in Paris, San Paulo and Shanghai. Under Mr. Chang’s leadership, Topline has grown at a 30 percent annual compounding rate from 2001 to 2008 and was ranked as one of New Jersey’s top 50 fastest growing companies for five years in a row.

“I came to America 43 years ago as an international student. I studied, worked and build a business. In between, I got married and raised a family. There have been many people who have played important roles in my life. They lend a hand, helped and supported me along the way. I do feel that I am a truly blessed person for so many good things that happened to me,” said Chang during the ceremony.

The National Ethnic Coalition (NECO) was founded in 1986 and is the awarding body of the Ellis Island Medals of Honor. The Medal embodies the spirit of America in celebration of patriotism, tolerance, brotherhood and diversity. This event seeks to single out high profile individuals who have made it their mission to share with those less fortunate their wealth of knowledge, indomitable courage, boundless compassion, unique talents and selfless generosity; all while maintaining the traditions of their ethnic heritage as they uphold the ideals and spirit of America. NECO remains dedicated to the maintenance and restoration of America’s greatest symbol of its immigrant history, Ellis Island. As the Medal is based on merit, there are no ‘winners’, only recipients who are recognized for their contributions to America.

“From his earliest days in the cosmetics industry as a packaging engineer and later as president of Topline Products, Mr. Chang has distinguished himself as a forward-thinking, long-range visionary”, stated the communiqué. “He was a pioneer in introducing packaging solutions from the Orient to North America and among the first to combine that manufacturing with filled cosmetics made in China. These two achievements have made Topline unique in the beauty industry: the company stands apart as a supplier of complete turnkey solutions for customers. Mr. Chang is also recognized as a creative innovator, obtaining more than 30 utility patents worldwide. Persistent in finding solutions to problems when others typically give up, he lives by his own motto - ‘No Way. No Way.’ (There is no way that there is no way.) But this dynamic attitude is balanced by his genuine concern and compassion for others, always lending a hand to help - ‘a businessman with a heart’ as one of his colleagues described him.”

Mr. Chang was inducted into the prestigious Packaging Hall of Fame in 2007 by the New Jersey Packaging Executives Club - an honour only given at the senior level to executives who have made a major contribution to the industry. He also received the distinguished Asian Business Leadership Award in 2009 from the U.S. Pan Asian American Chamber of Commerce (USPAACC) and Wells Fargo Bank. He founded and is chairman of Rutgers Packaging Engineering Advisory Board, a member of Industry Advisory Board of the School of Engineering at Rutgers University, and also a member of Board Overseers at the Rutgers Foundation.