The Alkos Group organizes the continuation of its growth

With the sale of Cosmogen to private equity fund MBO Partenaires, Gérard Gieux, the historic industrial shareholder of the Alkos Group, is taking over the majority of the Group’s share capital while allowing it to deleverage and to consider future investments and growth with ease. The goal is to grow the Group’s annual turnover from 60 million euros to 100 million euros over five years and, possibly, to diversify its product portfolio through an acquisition.

Actually, the year 2016 was a busy one for the Alkos Group: its visual identity was redesigned, the construction of a new plant for its subsidiary Inter Cosmétiques was decided, a new General Manager joined the company and, eventually, its shareholding structure was reorganized to support ambitious growth targets.

Let’s recall the Group’s history. In 1998, Gérard Gieux, founder of Cosmogen, a French manufacturer of cosmetic packaging and applicators, acquired Alkos Cosmétiques, a manufacturer of cosmetic pencils, then two other companies in 2008, Intercosmétiques (make-up and skincare products) and Sagal (hygiene products), eventually gathered within the Alkos Group. In 2014, to fund an ambitious investment program, Gérard Gieux had called on equity fund MBO Partneraires, which became the majority shareholder (51%) of a holding company gathering Cosmogen and the Alkos Group.

At the end of November 2016, this holding company was reorganized with the separation of the Cosmogen entity, which was fully taken over by MBO Partenaires. The transaction allowed Gérard Gieux to increase its stake in the Alkos Group by taking over the majority of the capital (75%), MBO becoming a minority shareholder. Furthermore, the proceeds from the sale of Cosmogen allowed Alkos Group to repay all of its senior debt and to consider the continuation of its investment program with ease.

"Gérard Gieux, the Group’s historic industrial shareholder, thus demonstrates his confidence in the strategy being pursued by the management team. With his experience, he will support key executives and shareholders including Dominique Vautier, CEO, and Philippe Pavageau, the newly arrived GM," the company said in a statement.

The management team thus has the means to carry out an ambitious organic growth strategy, leveraging on the 40% increase in capacity brought by the construction of the new plant in Angers (an investment of 8.5 million euros), on the development of innovative products and on international growth. The target of the shareholders is thus to increase the group’s turnover from 60 million euros to 100 million euros over the next 5 years.

"The group still achieves a large part of its turnover in France, we have a big potential for growth in export markets," explains Florence Lefeuvre, Sales, Marketing and Communication Director of the Alkos Group. North America and South America remain priority targets for the Group which has just opened a sales office in New York and will participate for the first time in the MakeUp in Sao Paulo trade show on 7 and 8 December 2016.

However, the Group does not exclude the possibility that acquisitions will reinforce this organic strategy, in particular in the event of opportunities to complement its product portfolio or to facilitate the implementation in foreign markets.

"Our customers and long-term partners are encouraging us to enter the powder segment. This could also be part of an international implementation," explains Florence Lefeuvre. The group would have already identified potential targets and some options would have been investigated in detail, particularly in North America. To be continued! 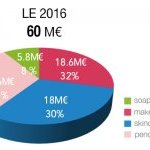 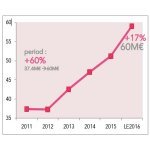