For the second consecutive year since the 2008 crisis, the Spanish cosmetics market has returned to growth. All categories of products are increasing and the country also recorded a strong jump in exports.

The demand for perfumes and cosmetics in Spain grew by 3.5% in 2016 compared to the previous year. The market is experiencing a second consecutive year of growth after the collapse that followed the 2008 crisis.

As far as perfumes and fragrances are concerned, most of the growth came from the selective and luxury segments (+5%), with a stronger increase from women’s fragrances (+5%) than from the men’s ones (+3%).

Within the skin care category, which is the main category in Spain (28% of the market), sun protection products recorded a very strong growth (+9%).

All the traditional retail channels are growing, with the highest growth recorded by pharmacies (+5.5%). Mass retailers still hold the higher share of the market (47%), followed by pharmacies (22%) and selective retailers (21%). Other channels, such as direct retails, beauty salons and hairdressing salons, account for 10% of sales.

According to the Stanpa, online sales are experiencing a sharp deceleration with an increase of +9% in 2015 compared to +57% previously.

The trade balance has maintained a positive balance since 2006 with a coverage rate of 129% in 2016.

The European countries, with Portugal and France in the lead, account for 60% of Spain’s beauty products exports, followed by the Americas (18%), in particular the United States, Mexico and Chile, then by the Middle East (6.5 per cent), Asia-Pacific (5.6 per cent) and Africa (5 per cent). 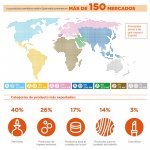 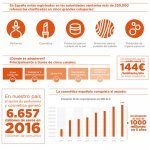 Brazil: ABIHPEC anticipates sales of cosmetic products to grow 1.1% in 2020