Skincare was a key topic of conversation at the 9th edition of MakeUp in Paris, which took place on June 21 and June 22 in the French capital’s Carrousel de Louvre. Organizers noted a rise in exhibitors operating in skincare - who this year represented one third of total exhibitors. After noting that more and more visitors were coming especially for skincare, organizers officially differentiated skincare exhibitors by adding a white dot next to their names on their stands.

This year, MakeUp in Paris teamed up with trend intelligence group Beautystreams to launch the ColorWave space, providing insight into the shades that we can expect to see influencing the colour palettes of future makeup launches.

The show also played host to conferences on hot topics of the moment, such as phygital (physical and digital) retail and the makeup market in the Middle East.

Shanghai-headquartered cosmetics manufacturer Thai Ho Group showed its Instagram-friendly, heart-shaped Dual Core Lipstick. The product is comprised of a colour lipstick core, encased by a transparent, glittery outer layer of lip balm. The lipstick is PH sensitive and the colour is gradually revealed after application. It also changes shade according to the skin’s PH levels. The group also showed its Hot Pour Powder Eye Shadow, which has a cream-powder consistency and claims to provide highly-pigmented colour.

Korea-based manufacturer World Sponge presented its playful Merry-go-round Applicator Container. The applicator rotates 360 degrees and can be manipulated like a games console controller to pick up the formula inside.

Malta-based Toly was one exhibitor cashing in on the pearl makeup trend with its new Solar Stars product. Its container is filled with pearls in three different colours, all made with avocado oil. Once released, they mix to form a humid powder which is said to hydrate the skin and illuminate the complexion.

American manufacturer of cosmetic brushes and accessories Anisa International, which was attending MakeUp in Paris for the first time, debuted its Heritage collection, which features the group’s SQ+ fibres - a synthetic alternative to squirrel hair. It also showed its Buffing collection, comprised of brushes with a curved shape to avoid harsh and visible lines, which aims to cater to those who usually use sponges. Anisa International also presented its Emollient Wing collection, an offshoot of its Wing collection. The Emollient Wing brushes feature slightly smaller heads, designed for the effective and precise application of emollient and cream formulas.

As ever, digital was a buzzword this year. For the third year in a row, the show featured the MakeUp in Digital space, which is dedicated to technology in the industry.

French connected skincare company Feeligold introduced two of its revamped skincare patches, which have now been boosted with new active ingredients. Its Anti Imperfections patch, which now features cutipure and niacinamide, aims to reduce the overproduction of sebum. Its Anti Dark Spots Patch, which now includes mandelic acid, intends to reduce the size and colour of dark spots.

The My Rouge G allows users to digitally try on the brand’s makeup products and offers over 450 combinations from the brand’s range. The user can then take a selfie of their favorite makeup look and print it off as a polaroid. The photo can also be sent by email, as can links to shop the products in the photo. LF Beauty’s mirrors collect data such as (such as age, sex, the time spent in front of the mirror per consumer and the most popular products and shades). This data can be used to adapt the brand’s stock replenishment accordingly. 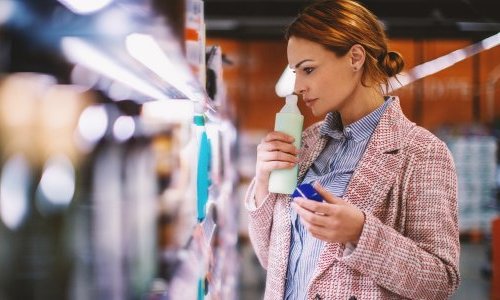