A two-part crossed analysis on the new self-expression models, their roots, and beauty implications by Leïla Rochet-Podvin, founder and manager of Cosmetics Inspiration & Creation, and Rémy Oughdiri, Director of the Trends & Insights Department at Ipsos.

These are the days of narcissism. Everywhere, people are growing more concerned with their personal appearance, and this can be seen in their behaviour. It is the celebration of the ego: everyone is invited to “become themselves”. In our society driven by entertainment, it has become crucial to adopt one’s own style, make it visible to others, and reveal our own individuality. This narcissistic preoccupation is conveyed through three recent obsessions, which we used as a starting point to our analyses:

The first one is massive and universal. It is the boom of self-staging. Within two years, selfies have become one of the most widespread practices in the world. This represents a real change in scale. People just cannot stop taking pictures of themselves. What used to be a punctual gesture has become common and systematic. Self-expression is thus both more and more controlled (people pay attention to what they show of themselves) and more and more unrestrained (pictures are sent quickly, sometimes without even thinking about the consequences).

The second obsession lies in the desire to break the bonds of anonymity and exist. The popularity of artists like JR, whose project Inside Out has conquered hundreds of thousands of people in over a hundred and twenty countries, is a good illustration of this. His idea is to grant an existence to each individual by taking their picture and sending it to them so they exhibit it on cities’ walls. His success shows this contemporary longing to flaunt oneself to the eyes of others.

Third obsession: beauty has become a capital that needs to be grown very early in life. This is what studies show about people under thirty. According to them, beauty is essential to “feel confident”, to “feel good”, and “be happy in love”. In some countries like China, it is even a major component to be successful in one’s professional life and make more friends.

In short, people express themselves more and more, and personal appearance now plays a determining role, just like speaking on social networks, in a different vein. Five models of self-expression have recently asserted themselves, and these models are also the sign that the relationship to beauty is changing, and the frontier of self-representation is being pushed further.

Tattoos are getting more and more popular. Young people in particular think they have more virtues now than piercings, and they especially value two of their advantages. First, their aesthetic appearance: it is “pretty” to have a tattoo. But above all, it is all about expressing one’s personality. Tattoos make it possible to stand out from others by asserting one’s own style. Another dimension also appears determining. Beyond aesthetic motivations and personal expression, tattoos represent a definitive gesture through which we inscribe the important moments of our lives. For example, for young women, having a tattoo is a way to engrave a memory related to a change or an important event in their lives. In our tweet, ephemeral era, tattoos are thus a way to introduce a form of permanence in one’s own story. Who said Generation Y was not concerned about leaving a trace?

This new body ornament expresses a stronger, more powerful femininity for a “re’marked beauty”. Women flirt with a provocative style, a rebellious femininity with the look of underground artists. We are now done with the diktat models of a perfect, passive femininity: now is the time for singular beauties that assert themselves and delightedly hack, twist and mix masculine codes (authority, power, black leather, and hobnailed shoes) and feminine codes (stiletto heels, perfect and glamour makeup). As for skincare, this trend puts the emphasis on beautifying products or tattoo protection (Coppertone Tattoo Guard Sunscreen in the USA, or Sol de Janeiro and its acai protective sun balm for tattoos in Brazil).

As for makeup, people play at overexpressing their faces’ assets – dark gaze, marked eyebrows, dark lipstick. Brands adopt these new codes with great relish, and this trend paves the way for tattoo artists in the beauty industry, as can be seen with the Kate von D range sold by Sephora in the United States.

2. The Lady Gaga syndrome – The art of transformation

The second self-expression model that is currently on a roll lies in what could be called the “Lady Gaga” syndrome. The eccentric singer regularly changes her appearance and obviously takes delight in doing it – never being where people expect her is one of her greatest pleasures. More and more women now feel the need to change their appearance. They feel like adopting a style that reflects the moment’s desires. Numerous recent initiatives seek to satisfy this longing, such as the “brushing menus” in blowout bars in the United States, or the 3D-printed multi-coloured stickers for nails.

Each of these means to change one’s appearance is quick and temporary. Behind this model lies the desire to adapt to an ever-changing environment, the desire to seize opportunities and live in the liquid world described by sociologist Zygmunt Bauman. It is also a way to remain independent and not to allow oneself to be locked up in one particular model.

The emergence of a “chameleon beauty” can also be noticed: it corresponds to the staging of styles and to a beauty that gets transformed according to desires and moods. People are riding on the wave of the culture of change that is so inherent to today’s society. They mix the virtual and real worlds and draw its hedonistic dimension from the industry of entertainment to stage their own beauty. And new technologies make this morphing game easier – Youtube star Michèle Phan provides tutorials for women to dare wear dark lipstick (more than 2 million views) and Alexa Poletti teaches how to transform oneself into a pastel Goth in 10 minutes (1 million views).

Similarly, brands like L’Oréal with Makeup Genius now offer mobile applications to test colours virtually and transform one’s look via a mobile phone before doing it in real life. Makeup is taking a re-creational, fun, or artistic turn.

3. Self Pixel – Staging oneself

The year 2013 was a turning point. All around the world, people started to frenetically take their own pictures and share them with their friends or relatives. The boom of selfies reveals the need to tell one’s own story to others. People also increasingly film themselves and send these small videos to their community. These practices have one major consequence: they lead to people paying new attention to their own self. But above all, they encourage people to stage themselves. The selfie practice is a new way to express one’s personality and disclose it to others. Like a true identity card, photographic or film staging is also a way to create ties and exchange with others. This is the paradox of our time: the new means to exchange with others are narcissistic. To maintain a relationship, people first need to get through a narcissistic treatment of themselves.

Me, only better, and without any visible touching up: this is the “self-portrait” beauty. A self-image that is under control and helps shape the portrait one wants to reflect and share. An image the way we want it to be, but which is perfectly mastered behind the scenes. There is now a new, fashionable trend advocating a perfect skin texture with no visible pores. It is the big boom of skin perfectors and complexion correctors: blurs, BB blurs, BB creams (baby skin), and CC creams (complexion correctors). Foundations are getting lighter and reduced to a veil or a serum. They are chosen according to their perfect affinity with the skin so that they leave absolutely no trace. In the United States, the Sephora technology + Pantone IQ system has become an essential to those women who wish to have a “flawless”, radiant complexion.

However, beyond the skin perfection trend also lies the great art of morpho-makeup, which adjusts contours with brushes loaded with dark shade powders (to slim the figures) and light powders (to highlight and plump ). Now is the time for “contouring” blushes that sculpt the face, and pictures of these techniques are invading Pinterest walls, Tumblr, Instagram, or Youtube tutorials.

This crossed analysis was presented for the first time at the Beyond Beauty show last September 10, 2014 at a conference entitled “New self-expression models”. The complete file by IPSOS and Cosmetics Inspiration & Creation is available from any of the companies: 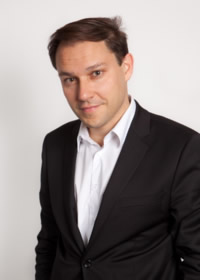 Rémy OUDGHIRI, Deputy Director General at SOCIOVISION (@Sociovision_FR), has held several positions in prospective and consumers studies in France and England (Roper, Ipsos). A specialist in lifestyles and consumer trends, he is the author of several books.

He gives conferences in France and abroad. He oversees numerous prospective studies on the evolution of society and consumption.