In 1992, DIAM was already behind the first generation of Mugler’s fragrance Fountains. Nearly 30 years later, for the fourth generation of the concept, the supplier entrusted the same design teams that participated in the project’s first stages to create a new eco-design concept ‘dedicated’ to the refill of the brand’s three emblematic fragrances - Aura, Alien and Angel.

Conceived as a design object, the Fountain is compact enough to be set up in a strategic position in the point-of-sale Available in freestanding as well as counter-top versions, the new Mugler Fountain allows perfect precision for in-store filling.

Beyond the product’s aesthetics, great attention was paid to its end of life. “For this new Fountain, we used a global eco-design approach, reducing for example the thickness of the materials and prioritizing components that are easily separated (using screws instead of glue),” explains Bruno Blin, DIAM’s sales director, in a release. The entirety of the Fountain is treated to prevent corrosion - both on the inside and outside - to guarantee resistance to the juice and thus durability at the point-of-sale.

With turnover of 324 million euros in 2018 and a workforce of 2,400 worldwide, DIAM Group offers a broad range of retail and merchandising solutions, notably for the luxury and beauty segments. 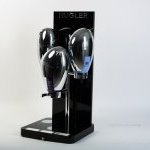 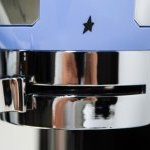