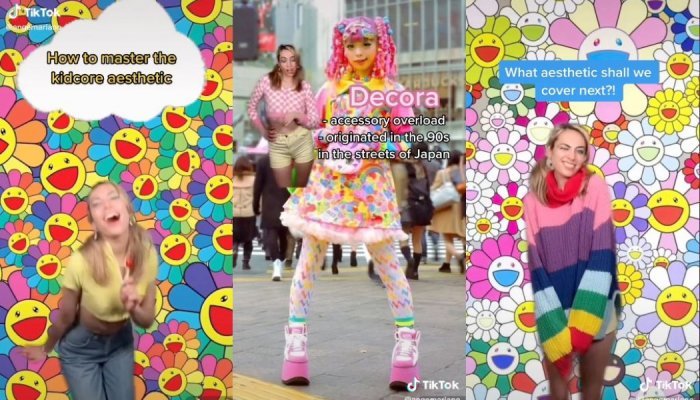 For a while, TikTok seems to have turned into a time machine, reviving all the clothes, accessories, makeup and other top trends of the 1990s and 2000s. This seems to be the latest craze for Gen Z, seemingly determined to use everything in their power to keep the blues at bay in these gloomy times.

Although only aged between 12 and 25 years old, Generation Z already seems to be nostalgic for childhood, to the point of embracing the outfits, cosmetics, and colorful or childish accessories that nurtured them since their earliest days. As such, the “kidcore” trend sets the tone for fall, and with it, there’s no way you can take yourself seriously. Faced with the many crises that now loom large in our daily lives, the young generation is in search of extravagance and carefree vibes.

And the "kidcore" trend isn’t just about fashion, but is also being played out in the beauty and accessories sectors, and even in the food industry. Gaudy colours, prints and ultra-kitsch accessories have taken over TikTok, which is busy reviving the key trends of the 1990s and 2000s, such as skateboarding, vintage consoles and even disposable cameras.

The #kidcore hashtag has already scored more than 1.3 billion views on Gen Z’s favourite social network, not to mention its derivatives, #kidcoreaesthetic, #kidcorestyle, and #kidcoremakeup, which count several million. The aesthetic has also been reinterpreted by some designers for the spring-summer 2023 men’s fashion week shows, for instance at Thom Browne and JW Anderson.

The accumulation of accessories, and the mixture of bright colors and/or prints, are among the strong trends linked to the "kidcore" aesthetic. Scrunchies, barrettes, colored tights, jewelry of all kinds — or in throwback childhood designs — are legion, but that’s not all. There’s also an influx of garments and styles inherent to the 1990s and 2000s that have, for some, already made a comeback in recent months with the rise of the Y2K aesthetic. Think overalls, crop tops, bucket hats, low-rise pants and vintage sneakers, for example.

On the beauty side, this translates into looks and hairstyles that are often inspired by manga and video games, such as pigtails, ultra-high ponytails, bright eye shadow colours, or even mini braids. All of this, of course, is embellished with beads, and other accessories straight out of this era. A trend that, in many ways, echoes the barbiecore aesthetic that brought gender extremes back took to the forefront of fashion this summer.