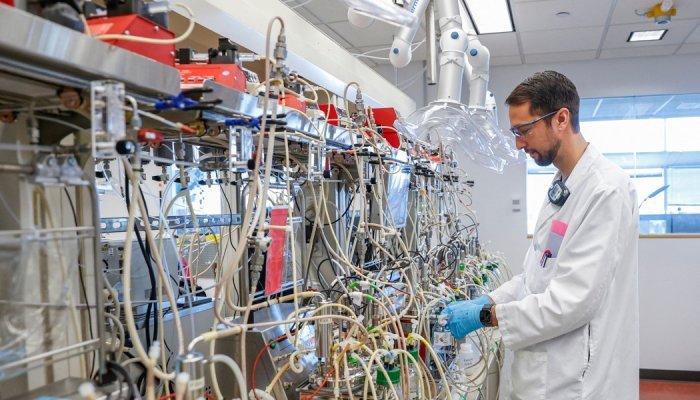 At LanzaTech’s lab in the Chicago suburbs, a beige liquid bubbles away in dozens of glass vats. The concoction includes billions of hungry bacteria, specialized to feed on polluted air — the first step in a recycling system that converts greenhouse gases into usable products. Thanks to licensing agreements, LanzaTech’s novel microorganisms are already being put to commercial use by three Chinese factories, converting waste emissions into ethanol.

That ethanol is then used as a chemical building block for consumer items such as plastic bottles, athletic wear and even dresses, via tie-ins with major brands such as Zara and L’Oréal. "I wouldn’t have thought that 14 years later, we would have a cocktail dress on the market that’s made out of steel emissions," said microbiologist Michael Kopke, who joined LanzaTech a year after its founding.

LanzaTech is among 15 finalists for the Earthshot Prize, an award for contributions to environmentalism launched by Britain’s Prince William and broadcaster David Attenborough. Five winners will be announced Friday. To date, the company says it has kept 200,000 metric tons of carbon dioxide out of the atmosphere, while producing 50 million gallons (190 million liters) of ethanol.

That’s a small drop in the bucket when it comes to the actual quantities needed to combat climate change, Kopke concedes. But having spent 15 years developing the methodology and proving its large-scale feasibility, the company is now seeking to ramp up its ambition and multiply the number of participating factories.

"We really want to get to a point where we only use above ground carbon, and keep that in circulation," says Kopke — in other words, avoid extracting new oil and gas.

LanzaTech, which employs about 200 people, compares its carbon recycling technology to a brewery — but instead of taking sugar and yeast to make beer, it uses carbon pollution and bacteria to make ethanol.

The bacteria used in their process was identified decades ago in rabbit droppings. The company placed it in industrial conditions to optimize it in those settings, "almost like an athlete that we trained," said Kopke. Bacteria are sent out in the form of a freeze-dried powder to corporate clients in China, which have giant versions of the vats back in Chicago, several meters high. The corporate clients that built these facilities will then reap the rewards of the sale of ethanol — as well as the positive PR from offsetting pollution from their main businesses.

The clients in China are a steel plant and two ferroalloy plants. Six other sites are under construction, including one in Belgium for an ArcelorMittal plant, and in India with the Indian Oil Company.

Because the bacteria can ingest CO2, carbon monoxide and hydrogen, the process is extremely flexible, explains Zara Summers, LanzaTech’s vice president of science. "We can take garbage, we can take biomass, we can take off gas from an industrial plant," said Summers, who spent ten years working for ExxonMobil.

Products already on the shelves include homecare products sold on the shelves of the Migros supermarket chain, in Switzerland, as well as a line of dresses at Zara. Sold at around $90, they are made of polyester, 20 percent of which comes from captured gas. Once purified, to remove any residual odor, this ethanol is also used to manufacture Coty group perfumes. The creation of perfumery ingredients is even being considered with Givaudan.

"In the future, I think the vision is there is no such thing as waste, because carbon can be reused again," said Summers.

LanzaTech has also founded a separate company, LanzaJet, to use the ethanol to create "sustainable aviation fuel" or SAF. Increasing global SAF production is a huge challenge for the fuel-heavy aviation sector, which is seeking to green itself. LanzaJet is aiming to achieve one billion gallons of SAF production in the United States per year by 2030. Unlike bioethanol produced from wheat, beets or corn, fuel created from industrial greenhouse gas emissions doesn’t require the use of agricultural land.

For LanzaTech, the next challenge is to commercialize bacteria that will produce chemicals other than ethanol. In particular, they have their sights set on directly producing ethylene, "one of the most widely used chemicals in the world," per Kopke — thus saving energy associated with having to first convert ethanol into ethylene.