At the event hosted on April 11 by Sabine Chabbert, Associate Director of the Fragrance Foundation France, and Thomas Misrachi, BFM TV journalist, nine perfumes and one brand were awarded with fourteen prizes honouring the fragrances launched in 2012.

All fragrances in the categories "selective distribution" and "broad distribution" were evaluated by a jury consisting of perfume professionals, members of the Fragrance Foundation and other experts (consultants, journalists and bloggers). The public also had the opportunity to cast their vote on the internet.

Among the fourteen prizes, which honoured the creativity and innovation of the perfume industry, four prizes went to "La Petite Robe Noire" by Guerlain and two to "Spicebomb" by Viktor & Rolf in "selective distribution".

As far as men’s fragrances are concerned, "Spicebomb" by Viktor & Rolf (L’Oréal Luxe), received two prizes: one for best men’s fragrance (Olivier Polge from IFF) and one for the best bottle design. Best advertising communication is "Kenzo Homme Sport" by Kenzo (LVMH).

"Only The Brave Tattoo" by Diesel (L’Oréal Luxe), created by Honorine Blanc and Alberto Morillas from Firmenich, won the audience award with 13%.

For the first time this year, the FiFi Awards France have rewarded niche or rare perfumes sold in less than 100 points of sale, and the jury chose to award "Volutes" by Diptyque. The tobacco-honey-scent was inspired by a long journey between Marseille and Saigon of one of the creators of Diptyque and was composed by Fabrice Pellegrin, perfume creator from Firmenich.

The jury has also awarded the Olfactive Studio brand, which received the prize for best concept.

At the end of the evening, the audience, consisting of professionals and the media, determined a winner in the category "Prix du Parfum Mythique". This category includes perfumes that were released at least 20 years ago and still are among the top 30 fragrances sold in France.

The winner in this category is "Shalimar" by Guerlain, which emerged from 15 nominated ’historical’ fragrances as the winner. 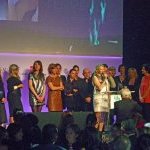 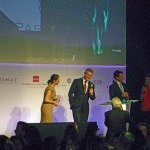 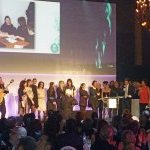