Brazil is a land of opportunities for the cosmetics industry

A recently released report from industry research firm RNCOS provides an in-depth analysis of the present and future prospects of the Brazilian cosmetic and toiletries market. The country offers great business opportunities, the report says. 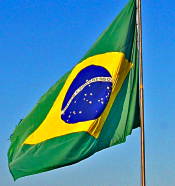 Brazil is the largest market in Latin America and one of the top five cosmetics and personal care markets in the world. Leading Brazilian cosmetics manufacturers no longer hesitate to capitalize on their successes at home and go exploring foreign markets. Despite regulatory and tax impediments, the authors of the report deem that the country offers immense investment opportunities for cosmetics makers and their suppliers around the world.

Indeed, Brazil is now one of the fastest growing and emerging markets on the cosmetics and personal care industry landscape. According to the RNCOS report, the country’s per capita consumption of cosmetics and personal care products should increase at a CAGR* of 15.49% during 2008-2011, with and emphasis on the skin care market, which is projected to clock in a CAGR growth of 22% during 2008-2011. Other dynamic segments are hair care products, which are anticipated to attain a CAGR of 19% during 2008-2011, and colour cosmetics, for which sales are likely to move up at a CAGR of 18% from 2008 to 2011.

According to the report: ”Brazil offers low cost manufacturing facilities and has well developed infrastructure with government support that is making the country an idle destination to establishing cosmetic and toiletries production base and target export market”. Actually, the opportunities created by the rising cosmetic consumption in Brazil may mostly concern those ready to produce locally. On the one hand, local competitors have established strong brands while duties and taxes rise prices of imported products in non-negligible proportions. On the other hand, the country has a large consumer base, therefore manufacturers can easily tap the domestic market. Furthermore, the rising cosmetic consumption in Brazil should stimulate the demand for chemicals in the cosmetics & personal care industry to US$ 12.83 Billion by 2011 the report concludes.