Third selective beauty network in France with regard to the number of outlets, Beauty Success is establishing itself primarily in small and medium-sized cities, where competitors are not operating. A service-oriented strategy betting on proximity with consumers, that seems to be bearing fruits. Objectives of the company: to conquer 10% of the French market and, why not, extend business abroad.

Beauty Success, the third network of selective perfumery in France with regards to the number of points of sale, behind Marionnaud and Nocibé, and the fifth as regard as purchasing capacity, is confirming its dynamism. The company has recorded an increase of its turnover by 5.8% in the first quarter of 2010 (7,2% as at August 31, 2010), against an overall market growth of 3%. It should be remembered that in 2009 the company had performed the strongest growth of its sector with a turnover up by 7.17%, against a market declining by -1.4%. [1]

Philippe Georges, CEO and co-founder of the retail network, intends to continue on this dynamic. First step: a new visual identity, along with a new signature, unveiled last May. The next phase was to be presented to the network of franchise partners at the company’s 16th National Convention which was held in Cannes from the 20th to 23rd of September 2010. After the front shops are put in line with the new visual identity, the network is actually planning an evolution in the concept of its outlets. “We are going to conduct some tests to review the layout of the outlets, this project will be stated in 2011,” explains Philippe Georges.

The dynamism of the brand reflects itself in the continued expansion of its network which can now rely on 260 perfumeries [2] among which 2/3 of franchises. Fourteen new stores were opened during the first semester (including 10 franchises) and we should continue on the same trend, allowing the network to approach 270 outlets by the end of the year.

According to its CEO, ultimately, the potential of Beauty Success is of 400 outlets in France in order to reach its 10% market share target.

Proximity positioning is the main reason to this success. The network is in fact primarily located in small towns generally neglected by other competitors. The company has even developed a new store format, the ‘Boutiques Beauty Success’, specially designed for catchment areas of 15000 to 25000 inhabitants. “This allows us to maintain or create the distribution of prestige cosmetics in areas where they no longer existed or had never existed.”

While a traditional Beauty Success perfumery has a sales area of 100m2 and retails at least 50 to 150 brands (i.e. 6,000 to 12,000 references), the format of ’Boutiques Beauty Success’ comprises outlets with a sales area starting at 50 m2 and retailing 12 to 20 brands (i.e. 2,500 to 5,000 references). A smaller store format which nonetheless does not neglect customer service. “Each of our outlets, including shops, offer cosmetic treatments. This is essential, especially in areas where no other offer exists,” underlines Philippe Georges.

Similarly, whatever the size of the outlet, the company strives to present a balanced offer between popular brands, thus ensuring store attractiveness, and smaller brands that allow differentiation and create a brand spirit, with sometimes regional variants, when a quality offer of local products exists, like for example in Brittany.

“Our results are the consequence of the recognition of the service we provide to consumers. We have exceeded the two million threshold of loyalty card holders. It is also the consequence of local and individual investment of each of our partners, and the result of collective work within the company. Not forgetting, of course, the effects of our implementation strategy, marked by the diversity of our locations: downtown, shopping centres, rural areas and seaside resorts.” Philippe Georges believes, that in fact, all this is perfectly expressed in the new visual identity of Beauty Success. “A good-humoured atmosphere, well-being and even happiness that we aim to provide our customers with, through welcoming, our services and advice given.”

As part of the development of its services, Beauty Success will launch its online store at the end of the year, with the main objective of attracting new customers to its outlets. “The advantages of an online store, with 24 hours a day and 7 days a week accessibility and availability, should enable us to continue to retain existing customers and win new ones. But the website was primarily designed as a recruitment tool to serve points of sale.”

Beauty Success already has a perfume shop in Tahiti and one in Reunion, and 7 outlets in Morocco as part of a master franchise. International development of the brand is clearly in focus, even though if for the time being its CEO considers it is still too early to give an appropriate answer. “We know we will be in demand because our model may be relevant in some countries. So we are starting to prepare ourselves internally for this eventuality, but we do not yet have structures to take that step. Having said that, we will soon be able to put ourselves to work.”

On this subject, as on others, people at Beauty Success known how to keep feet on ground. “To expand overseas means to adapt to different practices, different cultures and different expectations. It does not just happen.” Nothing in the short term, therefore, but the teams at Beauty Success are learning and are preparing themselves. 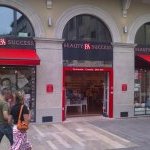