After a record breaking edition, the ADF&PCD show joins the Easyfairs’ portfolio

The news about a possible acquisition of Oriex Communication, the company organizing the ADF & PCD (Aerosol & Dispensing Forum and Packaging Perfumes, Cosmetics & Design) show, by the Easyfairs group has been in the air for nearly a year. The information is now official.

EFI, part of the Artexis Easyfairs group, confirmed the acquisition yesterday with the aim to expand its international presence in the packaging event and congress sector. Easyfairs the events Packaging Innovations, Luxury Packaging, Label&Print and Empack. Easyfairs’ existing portfolio includes 32 events across 16 cities and 11 countries, attracting over 100,000 visitors and 3,500 exhibitors each year.

The latest edition of the ADF & PCD event opened its doors last week in Paris. The combined events attracted about 6,000 attendees from over 70 different countries, and a record number of 350 exhibitors.

Oriex Communication will henceforth come under the leadership of Éric Éverard, CEO of Artexis Easyfairs. However, EFI intends to organise ADF & PCD events and conferences with existing Oriex staff, to provide continuity with the existing concept.

In order to address the increasing demand from exhibitors, the ADF & PCD event will move to a new venue next year. The show will be held on the 18 and 19 January 2017, at the Porte de Versailles Exhibition Centre, Hall 6, Paris.

In the meantime, ADF & PCD will held its first North American edition in New York, as part of a convention with Artexis Easyfairs’ US subsidiary, on 13 and 14 September 2016 at the Altman Building & Metropolitan Pavilion. 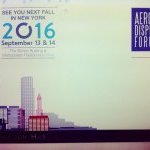